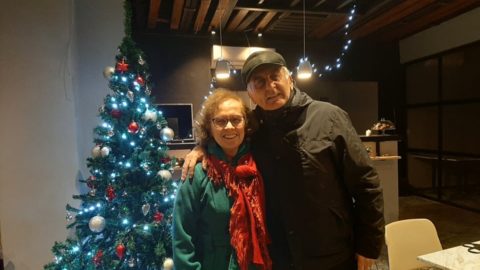 We started a church in Larissa with the focus of reaching the city. The Lord has done a great work in our church many have believed some left to serve in other churches cities and countries. Right now we try to serve the general population of Larissa, the gypsy community and the homeless and needy. We also in the process of opening a coffee place for reaching especially the younger generation of Larissa.

George and Despina with their two sons and one daughter have planted this church over 25 year ago and it grew to around 80 people while many of discipled believers returned to their respective cities and countries to spread the Gospel and serve the Lord there.

My wife and I were born in Katerini. I also grew up there, she grew up in Thessaloniki. We have three children, two of which are married. One is living in Athens, pastoring and replanting. The other is in Thessaloniki doing a church planting effort. And the third one is working in a school with refugees! Also, we have four grandchildren.