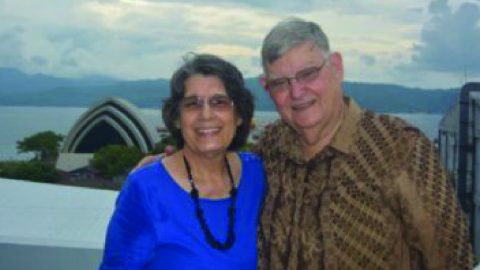 Java Evangelism hosts a program with scholarships for underprivileged children and young people in remote areas. The program helps them continue their education and disciples them with intent to send them back home as community changers.

Dennis Free and Lynn Free have found great joy in serving among the peoples of Indonesia since 1975.  Until 1999 they served on the densely settled island of Java in evangelism, church planting, and leadership development.  They were also privileged to play key roles in the establishment of the Christian Church Bible College in Salatiga.  For the next years they focused their energy on the formation of an Asian team for outreach to a very resistant Muslim group in the province of South Sulawesi.

Since 2011 their attention is given to unreached people groups in the near Ambon, in the Maluku islands. There is little of any intentional witness to the migrant and local Muslim people groups here, since an inter-religious conflict fifteen years ago.  Nothing would please the missionaries more than to help facilitate Church Planting Movements in these groups over the next several years.

Dennis graduated from Point University (named after attendance). He had a conviction early in life for spreading the gospel, but did not realize the potential for his calling until later discovery. At first he did not think he would become a sent missionary, but God worked through his congregation to cultivate his heart for spreading the gospel internationally. In 1975, both he and Lynn relocated to Java, Indonesia together and started their missionary work!

Dennis and Lynn have been serving in Indonesian since 1975. Both their children were born and raised in Indonesia. Their daughter, Bethany, married an Indonesia man and still lives in Indonesia where her and her husband are raising their 4 kids. Their son now lives in Nashville with his wife and 2 kids. Dennis and Lynn retired in 2019, yet continue to aid projects in Java.