Team GO Rwanda 2016 landed in Kigali on a Tuesday. We are a strong team and a fun team and by Wednesday night we were praising Jesus with about 150 young adults and pastors from Rwanda, Uganda, Tanzania, DR Congo, Burundi and Kenya at the Grand East African Youth Conference 2016. This year it was held in Rwanda and hosted by SCC’s Rwandan missionary partner Anastase Sabamungu and his Church, Agape Community Church. So we got to tag along. For the next 3 days we rose at dawn and laid our heads down past midnight. We prayed and listened to the word, we taught and preached, we praised, and praised, and praised, and praised… and praised. We learned to speak some Kinyarwanda, and Swahili. We let go of fear and pride and embraced love and truth. We led worship, we jumped and danced, we laughed at ourselves. We listened and hugged and cried and good gracious did we laugh. True, from deep inside you, laughter. The kind that leaves your face hurting and your eyes watery. The kind that leaves you with palpable sense of joy once you recover.

In the face of such faithfulness and joy, the logical thing would be to assume that the people attending this conference are doubly blessed and living lives free of trial and full of God’s favor. That they have been protected by the God they praise. That they are provided for without much struggle. That they live lives free of disappointment, fear and pain. And we all know, or should know, that this is not the case. We have seen the famines, the poverty, the oppression, the genocides… we have seen the endless pain that cuts deep through Africa time and again and again and again. What we don’t see much of is the joy. So I want to write about true joy and great faithfulness in the face of overwhelming pain. That’s what struck me most during my first 4 days in Africa. I wish I could bring you here to see it or somehow make you experience the whole of it, but I don’t know how. So I think I will just do the best I can to tell you the stories of a few of the many incredible people I met this week.

Bosco
My teammate Jordan and I met Bosco after lunch on Friday at the youth conference. It was a lovely Kigali day, we were well fed and as we walked up the hill to the worship center we struck up a conversation with this friendly, neatly dressed man with a name tag that said BOSCO- Burundi. We exchanged names and pleasantries, and I knew just enough about Burundi’s current political tumult (what some would say is quickly building momentum towards a 3rd genocide) to not ask questions about his country’s stability. We talked about his wife, who is a doctor, looked at pictures of his 4 adorable young children. He casually tossed out that he didn’t have much of an extended family. That his mother and father had been “cut down by machete” in 1994 (Burundi had a ’94 genocide at the same time as Rwanda. It got far less attention, because only 300,000 Burundians were slain compared to Rwanda’s 800,000 plus.) I caught my breath and walked on with him. I talked about my kids, and we laughed over having loud, busy children and how my husband must be so tired and wanting me home by now. I responded that his wife must want him home too and he said “Oh she is here. We are here.” I assumed he meant they had traveled with him to Rwanda for the week but he continued on by saying “You see, one day as I was working… I run an orphanage you see. With many children. Two hundred and fifty children. In Burundi. And they are like my own. As if I have 254 children you see? but one day, as I was working 4 men, armed with guns, they come into my office and they say to me ‘We have orders to kill you. You have 3 hours to leave Burundi.’” At that point, the 3 of us stopped walking, and there on the side of a hill in Kigali, he went on to explain how for a minute or two he cried. Not because he was afraid, or in despair, but because he realized he had to leave his orphanage and he did not know who would care for his children if he fled. He said “I cannot take 250 with me you see?” We nodded and blinked speechless. He said he cried there for a minute or two, and then prayed. Then he called his wife and then they left. Their home, their friends, their jobs, their belongings, their life, everything. They just got in the car and drove away. On that day, this innocent, Godly family became one if the 250,000+ Burundian refugees scattered throughout Rwanda, Tanzania and Uganda. In an instant. And he is not angry, he is not bitter, he is not afraid, or full of self-pity. He does not seem to bear a trace of any of these terrible wounds. On the contrary, Bosco exudes joy, kindness, selflessness, and his most astounding trait, hope. This kind of response is not earthly. It’s just not. No one on earth could muscle through and produce that on their own or “fake it till they make it.” It is only by the living power that we have in Jesus Christ as believers that someone walks away from that with a face that looks like that, giving thanks always, serving people, loving people, starting over with a hopeful outlook. That is only Jesus. And the people who work for him. Bosco and his family now attend Agape Community Church and are dear to Anastase and his family. His wife is once again practicing medicine. And we got to see their precious babies run around Agape on Sunday yelling “Hey mama!” as their mother prayed in front of the congregation. They are in good hands and will be more than fine. He did say that people stepped up in Burundi to care for his 250 children still there. But that many of the children refused to eat for weeks because Bosco was gone and they feared he was dead, but that eventually they began to heal as well, they started to eat again and hopefully will thrive and survive. 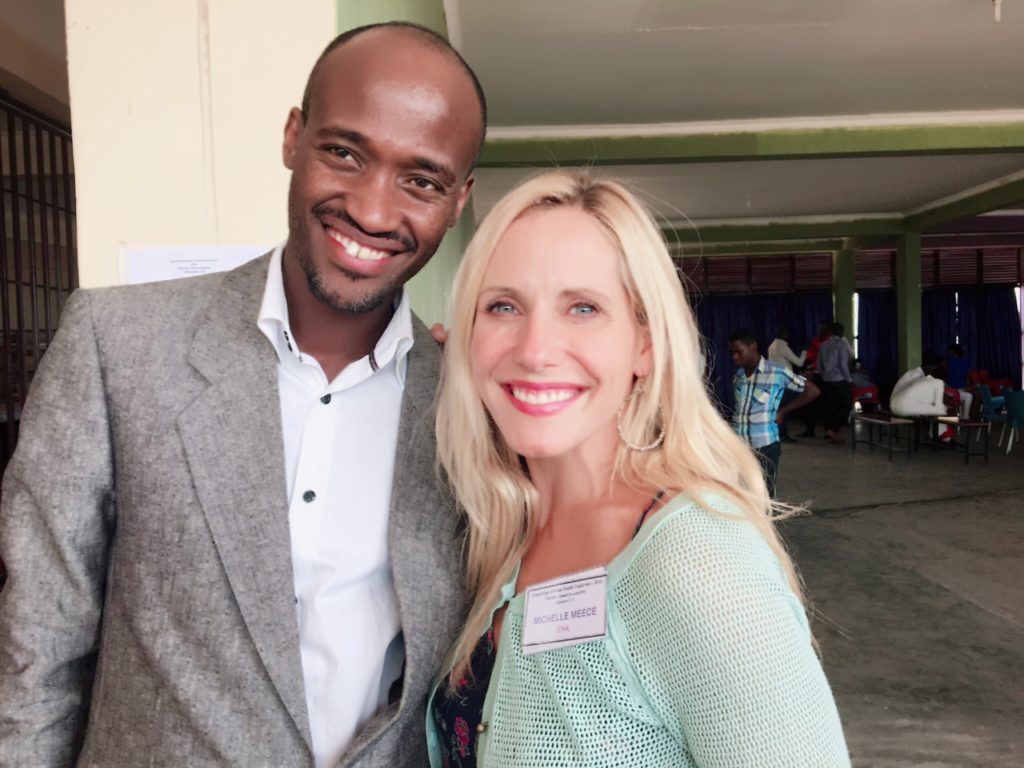 Jordan and I gathered ourselves up and right before we started up the stairs I asked “Why was your name put on a list of people to be killed?” He responded that as the killings and the refugee flight increase, many homes and large plots of land are being abandoned and that the young groups of armed militia have taking over the homes and claiming the land. He said his crime was that he spoke out against that and told people it wasn’t right and that they shouldn’t be taking what is not theirs. I stared at him and dumbly said “John the Baptist” He smiled and nodded as he began to chuckle. I said “you told a truth they didn’t want to hear.” He nodded. Still laughing, then sighed and said “Yes, many people do not want truth.” He patted us and laughed and walked up the stairs to worship and pray. And Jordan and I followed up. Forever changed. Forever grateful. Praising God.